HomeResourcesNews/ArticlesUncategorizedWhy looking for hard skills can be bad for business

Given that two candidates look similar on paper, why is one successful in a role and another not? Anyone who has had the dubious pleasure of career guidance software at school or college will know that prescribing careers based on qualifications and hard skills alone often produces unpredictable results.

Job descriptions should carry the same caveat. Drawing up a set of skills and qualifications needed for a job can prompt the present successful incumbent to comment: “If those qualifications had been demanded for my job, I would never have been shortlisted.”

Perhaps we need to question the premises that we take for granted when setting up or describing a job and attempting to match a person to it. In addition to the traditional measures, we need another method for analysing job compatibility.

At Belbin we use the idea of two separate dimensions: “eligibility” (CV, qualifications and hard skills) and “suitability” (personality and behavioural tendencies).

According to Meredith Belbin’s research and experience in industry, certain patterns emerged from observing the role of hard skills and behavioural inclinations in matching people to jobs: 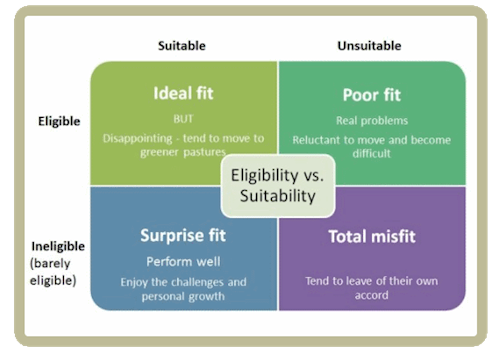 Those who were neither eligible nor suitable acknowledged the fact and moved on to other roles.

Those who possessed the qualifications but not the tendencies tended to get stuck; often defensive and resentful of having to leave a job for which they were qualified on paper, but unable to fulfil the role due to other factors which had not been taken into consideration during the recruitment process.

Those who possessed both the qualifications and the appropriate behaviours for the job would seem to be an ideal fit. However, Meredith found that they didn’t tend to last long in the job. Since there was no real challenge or learning curve, these candidates would often see the role as a stepping-stone and leave for greener pastures.

Those who lacked the hard skills but possessed the behavioural tendencies required tended to fit best with the job. Unlike the “ideal fits”, they saw new challenges and opportunities for development.

In other words, Meredith surmised that not only did eligibility fail to guarantee a good fit with the job, but that it could actually preclude it. Managers, unwilling to confront appropriately-qualified candidates with the idea of unsuitability, often chose to let sleeping dogs lie.

However, there is a balance to be drawn. It is difficult to defend the idea of recruiting candidates whose background and experience bear no resemblance to the job in question. In most cases, a more general set of abilities are required. However, we tend to overvalue those candidates who already possess the hard skills we seek and overlook “semi-eligibles”: those who, with training and experience in the job, could last longer in the role, become valuable contributors and gain more fulfilment from it.

As Meredith puts it:

“Indigenous talent, discovered in this way, usually plants deeper roots and develops more loyalty to the organisation. Success comes about through combining Team Role strengths with the provision of suitable opportunity.”

Contact us to see how you can start using Belbin to help find your surprise fits!

Written by the Belbin Team UK.

Do you have questions about how we can help your company? Send us an email and we’ll get in touch shortly or phone us between 9:00 and 18:00 Monday to Friday.

By submitting this form I understand that Belbin will share news and information with me via email. We will never share your details with third parties.